VCM Interactive was asked to produce a corporate video covering the launch campaign of Johnnie Walker’s NEW Double Black in downtown Toronto, ON Canada. The challenge was how to create an exciting video that showed the extensive advertising campaign that bombarded the TTC King Station as well as billboards across the city. A variety of footage was captured including tracking time-lapse shots. It also added style and to allowed us to exemplify the high traffic areas…Keep Walking! The music we selected added an emotional build up to the videos. A viral spot may be next.

VCM also covered the “Out of Home Campaign – transit shelters” promoting Johnnie Walker Blue Label. The campaign was plastered in downtown Toronto’s financial district. We had a lot of fun with the shoot and our client seemed to be very pleased with the corporate videos. Here at VCM we like to go over and above client expectations and give more bang for the buck in the world of multimedia and corporate video production. 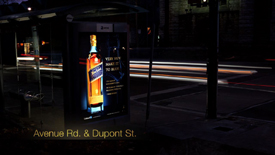 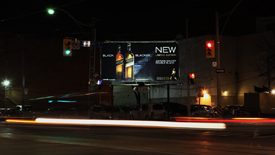