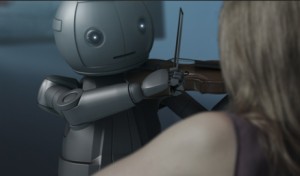 Screen Grab from “Love songs from an Android”

VCM Interactive’s President, Paul Nandrajog had the pleasure of co-producing a short film that screened at the prestigious 2013 Cannes International Film Festival. The short film is called “Love Songs from an Android” and comes from the wild imagination of the skillful Toronto based Director/filmmaker, Sol Friedman. The short film is about a robot’s journey for unrequited love. The film screened in a block of short films presented by Telefilm’s ‘Not short on Talent’ section at the 2013 Cannes film festival. The film was created with some funding from bravoFACT. The Not Short On Talent screening is a special exhibition showcasing short films at the Cannes Film Festival, which showed over 40 Canadian short films, nine of which are bravoFACT funded shorts. Unfortunately, none of the cast or crew could make it for the festival celebrations, but they were sure to celebrate in their hometown of Toronto, Canada.

Shot in-studio at Pie in The Sky on a RED-One cinema camera with some on-location shooting in Toronto. Paul Swayze was the Production Designer and he did a fantastic job with the set design. The visual effects and 3D animation were thoughtfully and patiently executed by the talented Penny Anderson and Gus Fernandes from Igloo VFX. The cast and crew were all great to work with. Maggie Szpakowska, Sol Friedman, Henry Sansom, and Paul Nandrajog spearheaded the production and post production.

This is the second short film Sol Friedman and Paul Nandrajog have collaborated on. Sol and Paul met at FRONT.TV, a reputable broadcast design and branding firm in Toronto.  The first short film they collaborated on was the award winning short film called “Junko’s Shamisen” which premiered at Slamdance 2010 and went on to screen at over 70 International Film Festivals winning a handful of awards; including BEST CANADIAN SHORT at the prestigious Atlantic International Film Festival based in Halifax, Canada.